Different Strings – The sands of time

The release of the fourth album from Malta's prog rock band/project Different Strings.

Different Strings – “The sands of time”

The sands of time is the fourth and upcoming album from local prog rock band/project Different Strings. This band/project have been active since 2004 when Chris Mallia, the mind behind this project, released the very first single entitled “Dead man walking”. Through out the years, Mallia continued to strive with new material having released various albums and singles and also managed to gather musicians to perform live locally for various local events and activities. Different Strings managed to get noticed internationally and be featured on various international magazines and in 2012 was invited to be featured on the notorious Prog magazine with an interview and a track within the free CD included. After some time focusing on other projects, Different Strings is now returning with a masterpiece of the genre.

For this particular album, Mallia managed to gather a number of musicians of exceptional quality having the participation of Italian singer Andrea Casali from bands Astra and Icefish on all vocals, AnneMarie Spiteri from local band Viper Soup Complex also on vocals on two tracks alongside Andrea and there is also the participation, with their individual solos, of Kurt Aquilina (KARR) and Jean Pierre Zammit (Tribali) on guitars and Arthem Zhuljev (from Spain) on tenor saxophone.

Icefish is an international band which comprises of virtuoso musicians like Virgil Donati on drums, Marco Sfogli on guitars, Alex Argento on keyboards and of course Andrea Casali on bass and vocals. This video is taken from Icefish’s “Human hardware”  album release with the single “It begins” and features the great voice of Andrea on bass and vocals.

Details about the album

The album is about one hour in length and features all the musical compositions and lyrics of Chris Mallia. This is a concept album in a symphonic fashion of composition in two acts. The whole thing will be completely scored and also carries the moniker name of a symphonic rock opera in E major, having a huge amount of orchestration and instruments with various moods that accompany the lyrics gracefully along the way. The plot narrates the story of an ordinary man from the Maltese islands from the post-world war II era in which he is describing, in different time lapses, the life difficulties of those days, mentioning sorts of poverty, hunger, prostitution and immigration. Some ideas came to life after having long chats with older relatives that lived their lives in that particular period.

This album is the best work ever composed by Chris Mallia and features a full orchestra accompanying the band on various sections of this symphonic rock opera. One particular track is totally composed for orchestra with the aid of the band and it will be featured ONLY on the CD version of this release as a bonus track. The formats of this release will comprise of the digital download version, CD digipack (with a bonus track) and LP format limited edition package.

To promote the album, two singles were released with accompanying videos.  The first one released in August of 2020 as the title track with alternate editing “The sands of time – single alternate version” and also released as a lyric video. The lyric video features Andrea Casali in his recording sessions held at the MixFactory Studios in Palermo Sicily with the collaboration of Alex Argento also from Icefish. The track was well received from various local radio stations focusing on rock music but also internationally, receiving 5 stars on Progarchives being rated as “Essential: a masterpiece of progressive rock music” through the link below.

The second single entitled “Ten dollar love – single version” was released in October 2020 with a locally shot and produced video featuring Anne Marie Spiteri as the main vocalist. Both videos of “The sands of time” and “Ten dollar love” can be viewed below.

Having on board a number of musicians to perform on this recording, which gave this project a fresh breath of talent and perfection, took its financial toll on the project’s budget, especially to employ the voice of a talented singer whom he is having a name internationally among great bands, so the main reason of this crowd fund is to try to diminish as much as possible the expenses but also managing to financially release it as a hard copy album with printed booklets and lyrics for everyone to enjoy.

As a thank you for your generous contributions we are offering the album as a reward in the format of your choice but also other numerous various rewards including a digital download of the remixed/remastered version of the debut album “…it’s only the beginning” to all the contributors. The other rewards are waiting for you depending on the choice of media chosen.

I would like to take the opportunity to thank you all so much for contributing in such artistic funds, with your loyal support you are helping making the local music scene a better and more professional one. Thanks so much and please donate ☺

How can I receive the digital downloads?

Digital downloads will be directly delivered to your inbox using wetransfer to the email address provided after the album release date.

When will I receive my album and/or merchandise?

The master will be sent immediately overseas for replication after the crowd fund ends and will be mailed to the contributors including all merchandise and rewards included as soon as they arrive.

What sizes are the T-shirts?

For those that would like to go for the LP format and receive all the goodies including the T-shirt, the size of all T-shirts will be Large (L). For those that would like to change the size can send an email to differentstrings@hotmail.com before the crowdfund ends. All the other T-shirts with the other choices carry various sizes and until stock lasts. Please email your size preference.

For other questions please email to differentstrings@hotmail.com 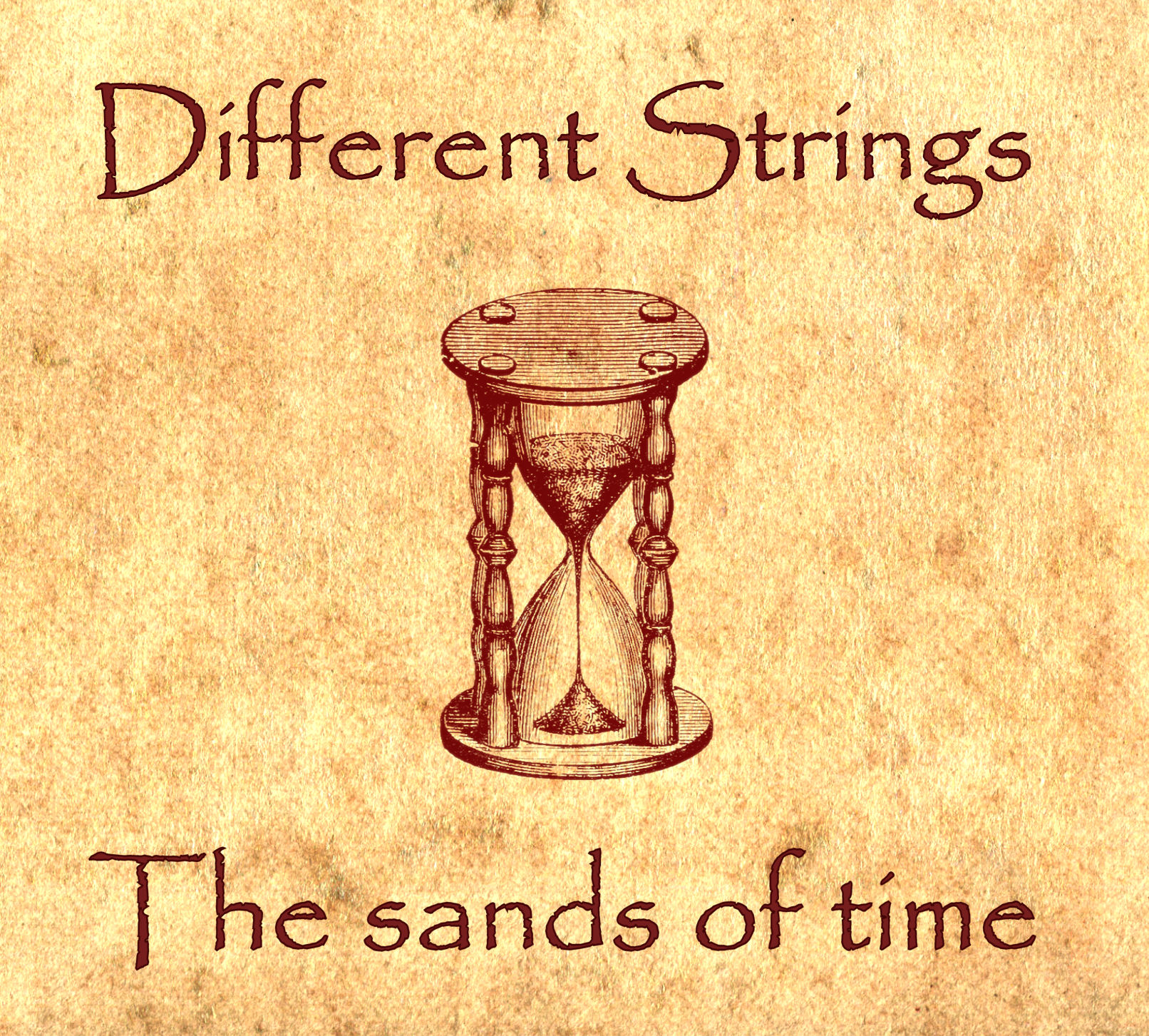 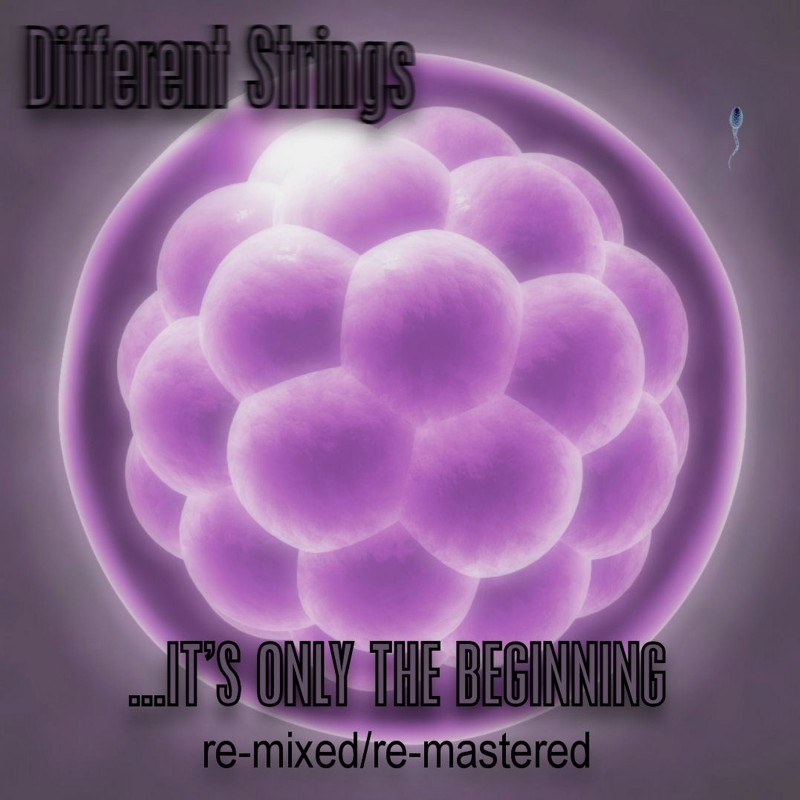 "The sands of time" CD Digipack format including bonus track and booklet plus extra reward of "...it's only the beginning" remixed/remastered in digital download format.

"The sands of time" CD Digipack format including bonus track and booklet plus 2 extra rewards of "The sounds of silence - part I" in CD wallet including booklet and "...it's only the beginning" remixed/remastered in digital download format. 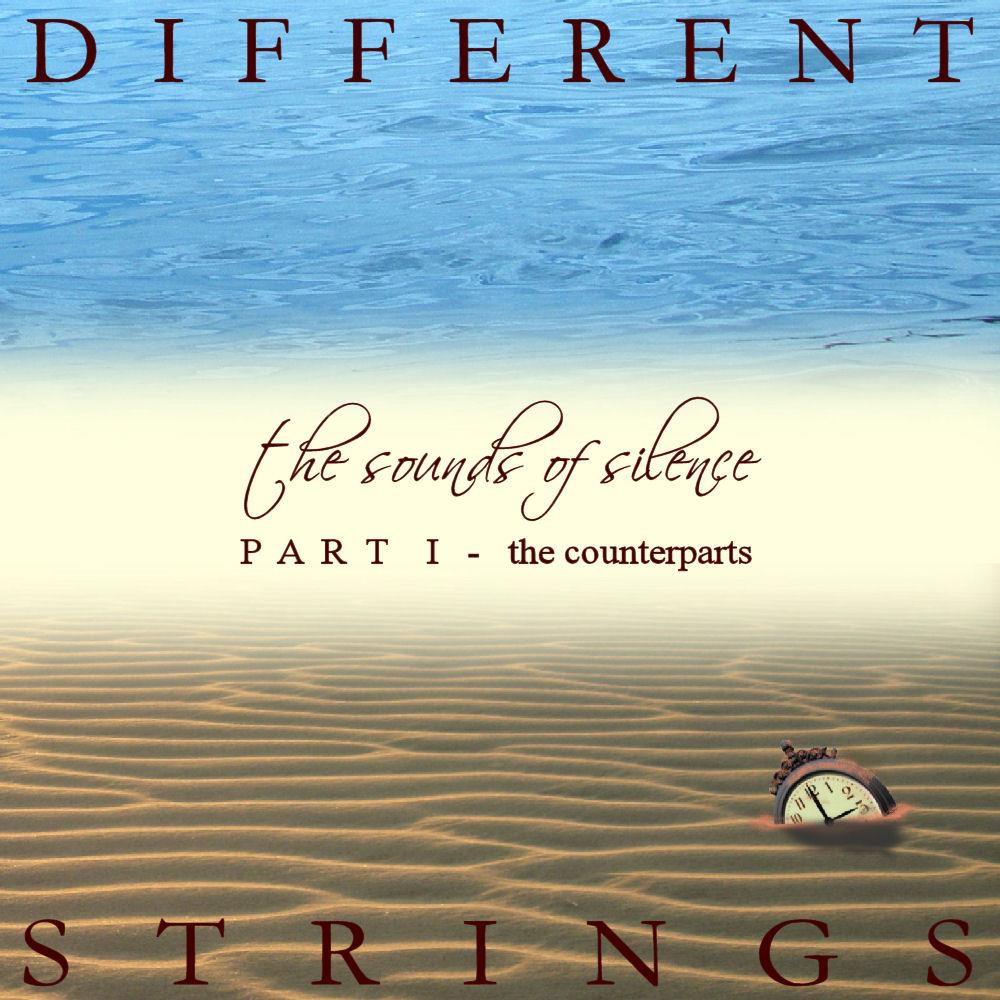 "The sands of time" CD Digipack format including bonus track and booklet plus 2 extra rewards of "The sounds of silence - part II" in CD wallet including booklet and "...it's only the beginning" remixed/remastered in digital download format. 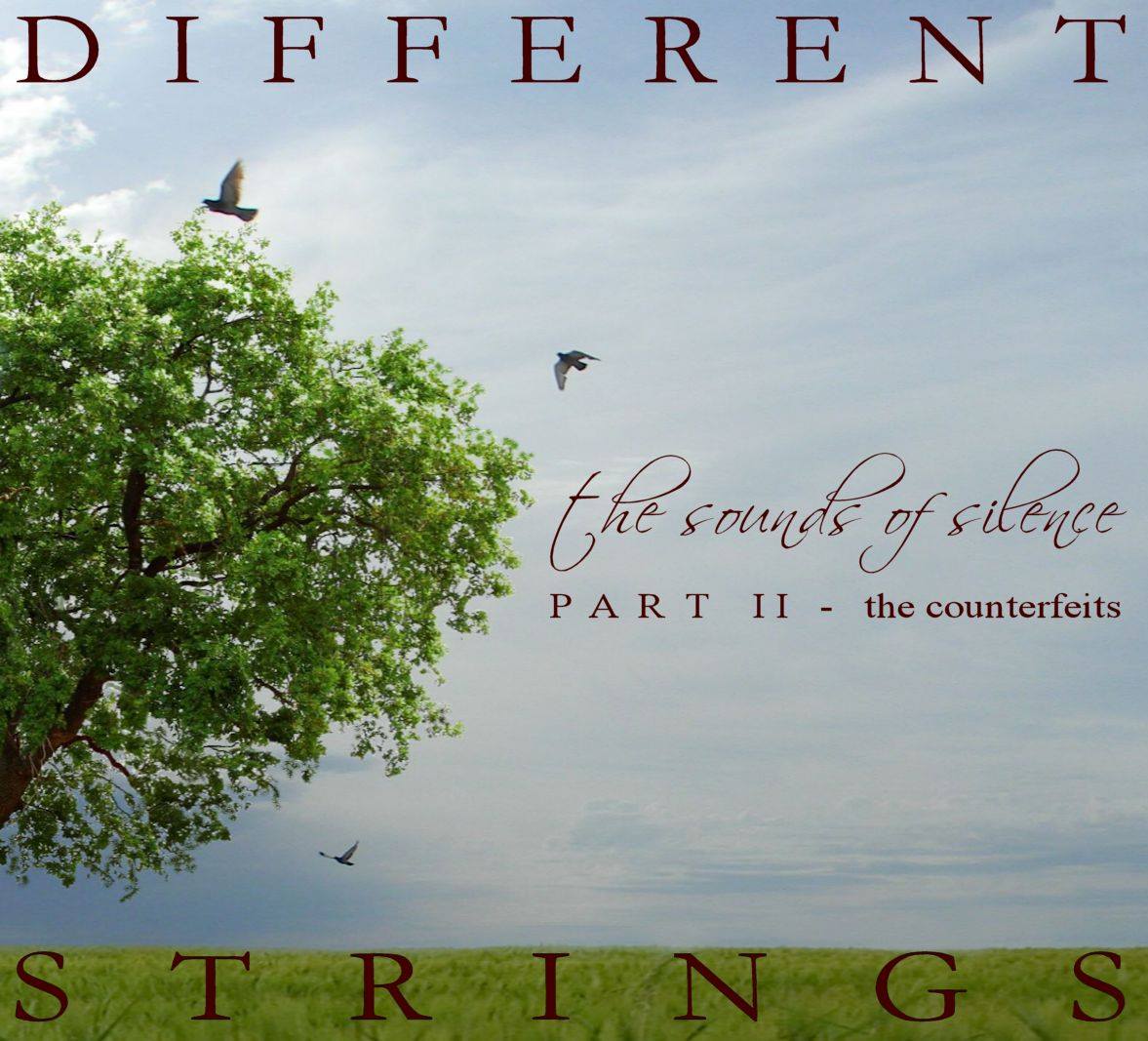 "The sands of time" CD Digipack format including bonus track and booklet plus 2 extra rewards of "Legacy of war" T-shirt and "...it's only the beginning" remixed/remastered in digital download format. 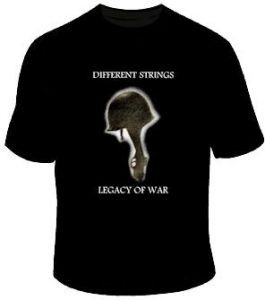 "The sands of time" CD Digipack format including bonus track and booklet plus 3 extra rewards of "The sounds of silence - part I and II" in CD wallets including booklets and "...it's only the beginning" remixed/remastered in digital download format.

"The sands of time" CD Digipack format including bonus track and booklet plus 4 extra rewards of "The sounds of silence - part I and II" in CD wallets including booklets, "...it's only the beginning" remixed/remastered in digital download format and the exclusive "The sands of time" white T-shirt with Da Vinci back printing. 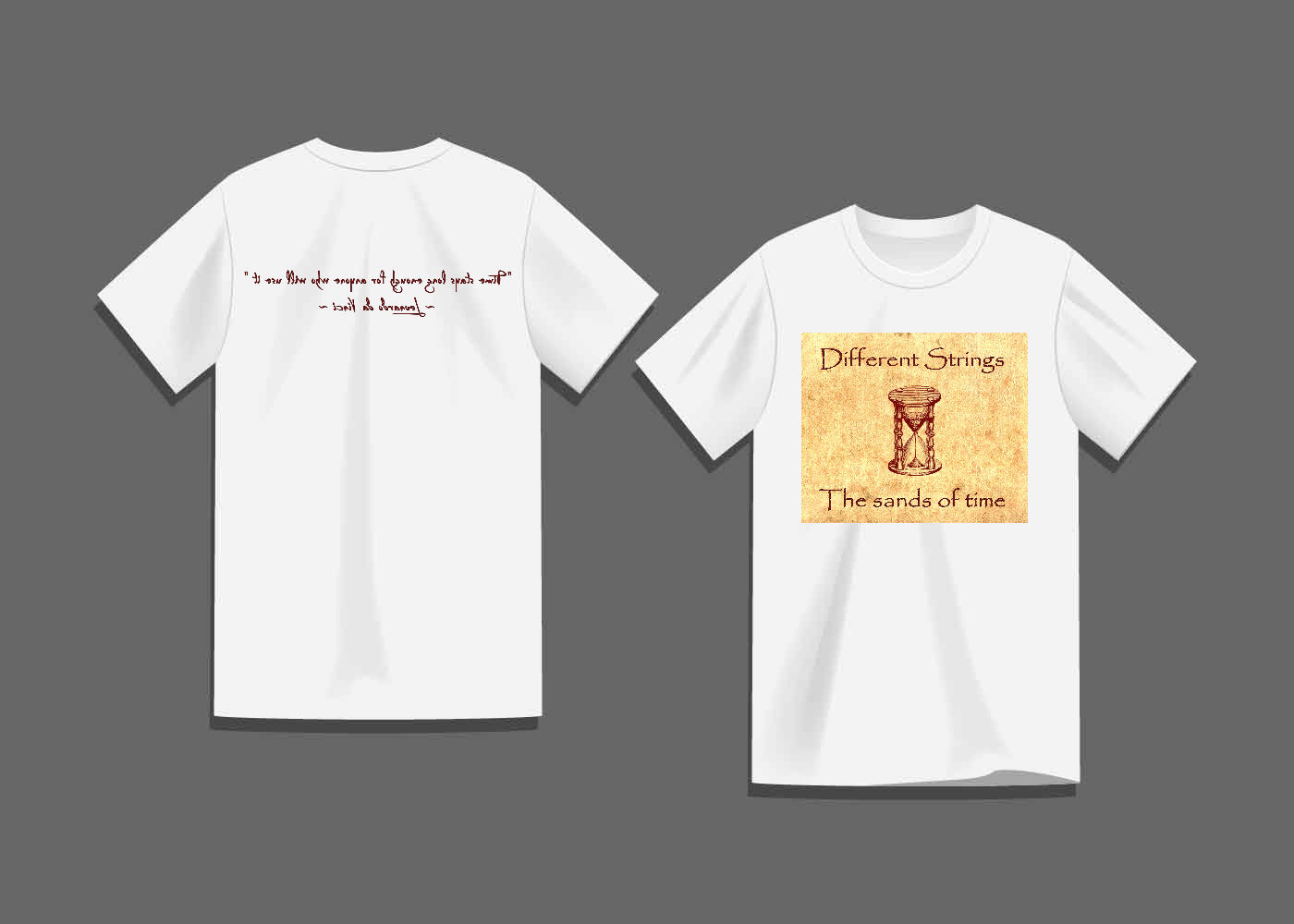 "The sands of time" limited edition LP format with artwork and lyrics plus 4 extra rewards of "The sounds of silence - part I and II" in CD wallets including booklets, "...it's only the beginning" remixed/remastered in digital download format and the exclusive "The sands of time" white T-shirt with Da Vinci back printing.